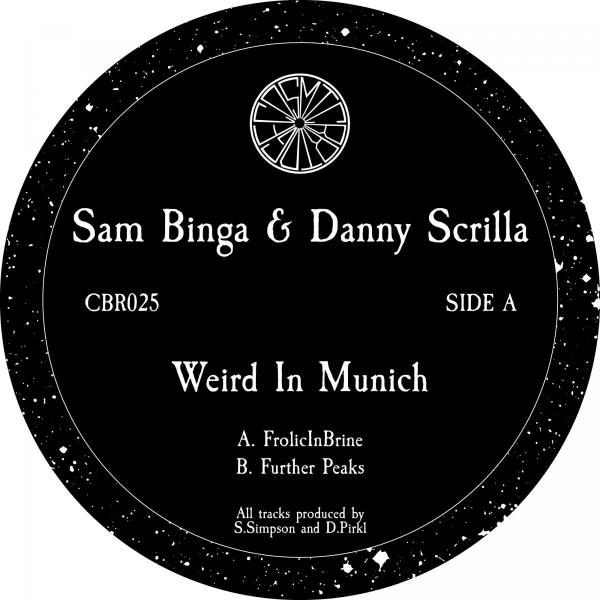 Cosmic Bridge continues to move forward with a two-track release featuring the dynamic duo of Munich's Danny Scrilla, an early member of the label's roster, and Bristol's Sam Binga, a close friend and collaborator of the label's founder Om Unit. Created during a weekend session at Scrilla's home studio, the release sees this long overdue Anglo-German meeting of the future minded go deep into unexpected sonic terrains and fully live up to its title of Weird in Munich. The trip begins on Side A with 'Frolic in Brine', a brooding roller that sets up the mood: deep, hypnotic and sweaty. The track unfolds from pulsating synths with a percussive rhythm underpinning a gentle procession of elements including synth arpeggios, languid guitar licks, and echoing sound effects. Ignoring dancefloor conventions, 'Frolic in Brine' instead opts for a minimal approach that delivers a shot of pure body music. Things get a little more industrial on the flip side with 'Further Peaks', a tougher production with a sturdy kick-driven base, rough-hewn loops, and percussive bursts that seems submerged in a disorientating layer of distortion. Beautifully ugly, 'Further Peaks' sits somewhere between the futuristic sheen of autonomic beats and hearing techno reverberate in the darker corners of Berghain's dancefloor. "We wanted to do something different than what we've done before," explains Danny. "I guess most people would expect a collaboration between us to sound different. Recorded in Germany and mixed down in Bristol, where it benefited from Binga's growing collection of outboard gear, Weird In Munich shows the range of these two producers and continues Cosmic Bridge's tradition of pushing dubwise, bass heavy music towards news horizons.