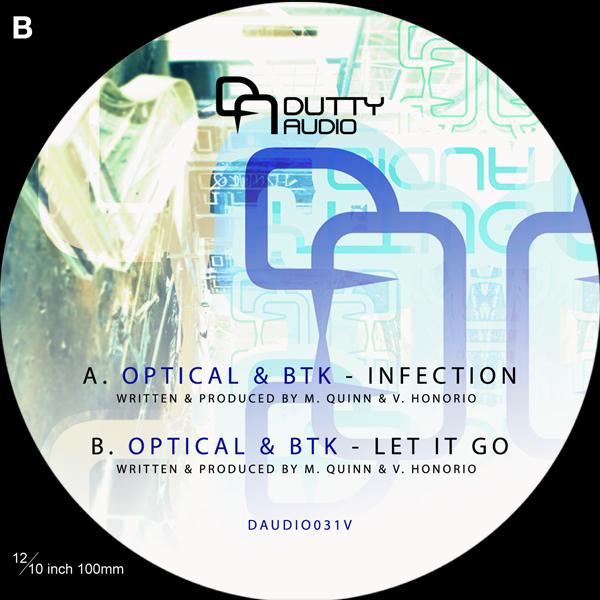 Vinyl records 3x12"
Out of Stock

DAUDIO031V: Infection jumps straight at you, jumps straight into life, and you'll catch the virus immediately. The initial repeated sample makes way for a banging beat, which in turn draws you into the surrounding atmospherics.Everything builds up nicely, with warped electronics launching into massive swirls of menacing bass. As fitting a composition courtesy of BTK and Optical, the production levels are high, with layers of sound sweeping in and out. The producers isolate things at the mid-point, before ripping the track back up to finish strongly. The beats'll grab you, the firing low end'll hold you, and you won't be able to escape the Infection. Let It Go is equally massive, with looped choral samples to lead it off. The flavour is different from Infection, with a smoother feel to the intro, but the levels are ramped up soon enough. Both producers absolutely go at it, with thumping drums and smash-through bass. The dancefloor is just going to love this one, and you can imagine it going off everywhere and anywhere it is played. Synths drop in later, but the main features of the tune are its beats 'n' bass. Never giving you time to pause, this one is a classic in the making. Nothing's going to hold you back, just Let It Go. Two absolute slammers from BTK and Optical. Get involved now. --- DAUDIO026V: DAUDIO026 is a very special release indeed. Forming the first part of a two-part special issue, the EP celebrates five years of BTK's nowclassic label, Dutty Audio. Dutty has always been an outlet for BTK's own music and collaborations, as well as featuring guest artists, standing for the highest quality dancefloororiented neuro- and tech-influenced drum & bass, and the new EP shows this off, with some massive releases of tracks from Optiv & BTK himself, Mindscape and Coppa, Maztek and Level 2. Prepare to enter the world of Dutty Audio, as the label sets the future by looking into its past. The first tune is Let It Loose, by Optiv & BTK, remixed by Emperor. This is classic Dutty of the highest order, dropping straight in to a charging main line, with barking samp les and an addictive bass line. Emperor sets his sights clearly on the rave, banging it out warehouse-style. Sit up, take notice, and Let It Loose. This Is swiftly followed by the Italian master Maztek taking on Do It Like This, from Mindscape featuring Coppa. After the echoing intro, Coppa's trademark vocals light up your speakers, before sinewy electronic noises take you up to the drop. Mashing beats lead you through, with Maztek adding in some rushy mini-breaks and increasing levels of insanity. Don't watch this one, just Do It Like This. The third cut sees the tables being switched, with Mindscape re-imagining Maz's Sinestesia. Yet more magic from both parties sees an epic build reaching for the ceiling, before coming crashing down with a course of flexible drum lines and rumbling electronic bass. You've Nothing To Fear from the closer, as Kyrist remixes Level 2. Creeping, crawling effects lead up to a funky, headnodding beat, which Kyrist uses as a tool to create an entire world in music and sound. DAUDIO026 rightly celebrates the first five years of Dutty Audio. Here's to five, and many, more. --- DAUDIO012V: This is the one you've truly been waiting for. The Blend LP drops at the perfect time for the Dutty Audio camp, after a series of acclaimed singles and EPs and high profile bookings for label boss BTK and other Dutty artists. With a varied, vivid collection over 11 tracks, the album builds on, and expands Dutty's universe, delivering track after track of quality neuro- and tech-inspired music. Contributions come from veterans like Optiv & BTK and Maldini, and newer names like Level 2 and Cern. Expect heavy hitting sounds, blended with the finest production on display in the scene. The album is a trip, so get strapped in. The Blend title could not be more apt, as the album ranges from the old skool-tinged blasts of C.A.B.L.E's future classic Individual, to Cern's ominous Fourth State. There's heavyweight business like label boss BTK and Optiv's majestic Let It Loose, complete with live-sounding drums and sliding effects, and the usual insanity from Teddy Killerz in the shape of the mean, sinewy, but still musical Mock.