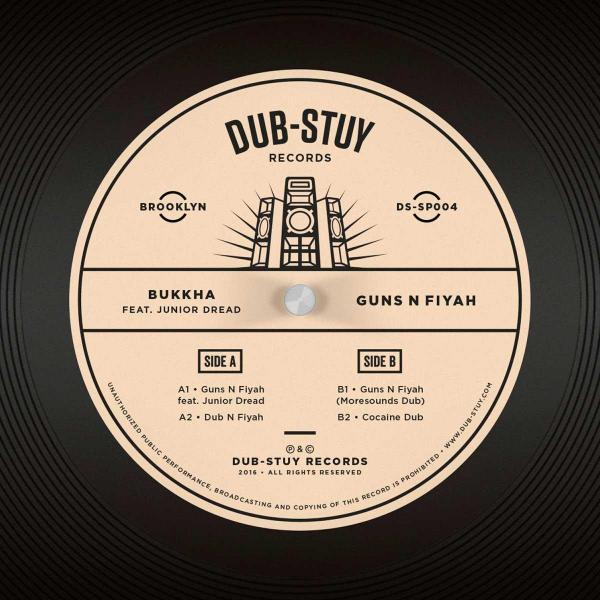 The next single from Dub-Stuy Records marks a return to conscious messages and uplifting vibrations with an international collaboration between American producer Bukkha and Brazilian vocalist Junior Dread alongside a remix from Paris' Moresounds. 'Guns N Fiyah' speaks to the ills of the world and the growing cries for justice emanating from the streets of America, Syria, and Brazil. Bukkha, originally from Louisiana and now based in Spain, follows remix and behind-the-scene dubplate collaborations with Dub-Stuy with an irresistible stepping production for his first vinyl release on the label. Inspired by classic UK steppers and dub, 'Guns N Fiyah' is driven by a heavy bass line with floating guitar licks and ominous horns. Completing the production is a stunning vocal performance from Sao Paulo's Junior Dread. One of the brightest rising stars on the international reggae scene, Junior Dread calls upon listeners with a conscious message that rises to a fever pitch in the chorus. Molded in the finest tradition of protest music, 'Guns N Fiyah' is an inspirational rallying cry for modern dancefloors. The 12" also includes two dub versions of the title track: one by Bukkha and a special from Moresounds, the Parisian producer who's been making waves in the bass music scene with releases for Om Unit and Doc Scott. As only he can, Moresounds transforms the original into a deep and cavernous eyes-down skanker. Completing the release is 'Cocaine Dub' by Bukkha, a bottom-heavy riddim that draws its own line between classic dub vibes and modern bass music. DJ support: Sinden, Ray Keith, Disorda, Toddla T, Rob Smith / RSD, Daddy G, Kenny Ken, Ras Kwame