The Outside Agency / SPL / Cooh 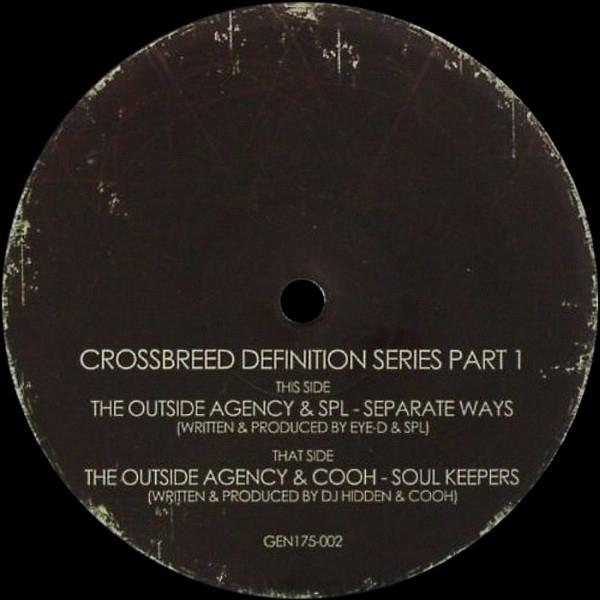 The Outside Agency's DJ Hidden & Eye D continue to define and refine their drum & bass/hardcore crossover sound with this second release on Genosha One Seven Five: The Crossbreed Definition Series Part 1. This series will feature collaborations between The Outside Agency and some of the leading names in hardedged drum & bass. For this one they teamed up with heavyweights SPL and Cooh. Separate Ways with SPL is moody track with razor sharp drums that effortlessly moves back and forth between offbeat drum & bass and rolling hardcore while never losing its flow. The middle section of this Separate Way harkens back to the early, simpler days of hardcore when less was more. Soul Keepers with Cooh has a somewhat misleading title as it doesn't have much in the way of soul. What it does have is unrelenting, pounding snaredrums that have taken the place of the kickdrums. You'll have to hear it to believe it. They didn't completely forget about the kicks, of course. Just like Separate Ways on the flip, this track features a middle section that flirts heavily with the way hardcore used to be: simple and effective. To sum it all up this is another multifunctional release on One Seven Five that should appeal to fans of hardedged drum & bass and hardcore alike. Pick up your copy now and start confusing the competition. DJ support by: Counterstrike, The DJ Producer, Donny, The Outside Agency, SPL, Ophidian, The Panacea, Mark N, Cooh, Mindustries, Limewax and more.