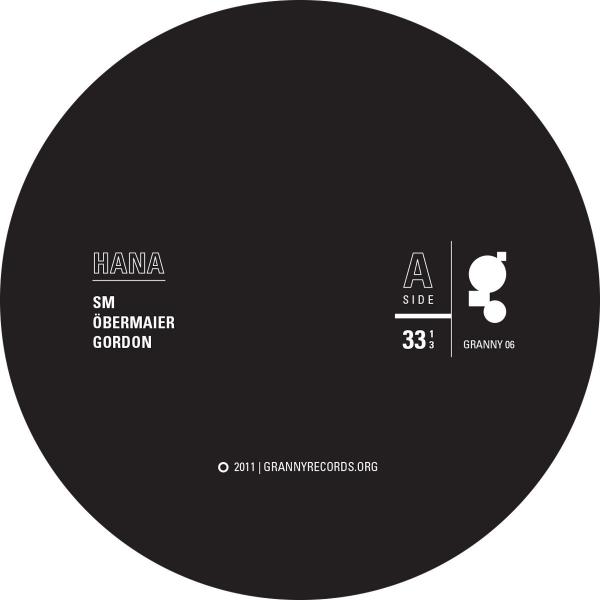 Mastered and cut by Rashad Becker at Dubplates & Mastering in Berlin. Hana's first and self-titled LP was recorded in Autumn 2010 at Facta non Verba and consists out of 5 tracks which are techno oriented with disposal of experimental and abstract elements. Reviews OMG Vinyl Hana s S/T LP is easily the best promo records we ve gotten in months. This Greek duo has somehow, almost entirely below the radar, released one of the most exciting electronic records of 2011. Their wobbly brand of techno sometimes chugs ahead at full-speed, other times easing back into a wider waver, almost resembling some weird, warped IDM. I will be shocked if this record doesn t get wider appreciation very soon. Whether that happens or not, we fully recommend it, track one down. Cyclic Defrost by Oliver Laing Granny Records duo Hana come correct with their first album, offering a refreshing take on techno and IDM variants in the vein of Jan Jelinek, Raime, Actress and hints of the mighty Chain Reaction label. Mastered at Berlin s Dubplates and Mastering by none other than Rashad Becker, a name that often appears in the run-out groove of artists who inhabit a curiously funky techno-not-techno netherworld Hana s debut self-titled release grows in stature and listening enjoyment with every spin. With a sense of fun and adventure inhabiting the grooves, Hana (who are also part of label-mates, Good Luck Mr Gorsky), explore experimental timbres and ghostly vocalisations with a lightness of touch that belies their recording credentials. Starting off with an abstract, Clicks and Cuts style intro, Liv slowly finds the sweet spot between mutant Detroit electro funk, a hint of the indie/dance territory of Matthew Dear and the abstract, yet rhythmic 12 releases on the Beatservice label, by Norwegian duo Information from the mid 90s. Obermaier implies the groove to begin with, until a wrong-footed man-with-two-left-feet rhythm leads into minimal acidic flourishes. Album opener SM heads in a Ricardo Villalobos vs. Nonplace Urban Field direction, as the lopsided rhythm and sepulchral vocals add a haunted edge to proceedings. CR80 uses beautifully syncopated live drums and urgent female vocals, and adds a driving, belligerent synth riff falling somewhere in between DMZ and Gary Numan. Echoic, boingy sounds threaten to derail the beat, but somehow it manages to maintain, reminding me of Shed and A Made Up Sound; more in overall feel than in the specific sounds. For those that enjoy abstract electronics that work just as well on headphones as on the dance floor, Greece s Hana are a duo to watch. Textura Hana's self-titled debut album arrives saddled with a (literally) cheeky front cover one would more associate with a 70s band like Wild Cherry than a Greece-based techno outfit formed in Thessaloniki last summer. Recorded in fall 2010 at Facta non Verba, the five-cut release finds Good Luck Mr Gorsky members Thanasis Papadopoulos and Thanos Bantis hunkered down in their chemical lab concocting formulae to go along with their material's stripped-down techno beats. Using analogue synths, samplers, and sequencers, the duo brings a decidely experimental edge to their productions, sprinkling as they do liberal doses of burble and flutter over bass-heavy techno rhythms. The opening track, Sm, sets the scene with a heavy low-end pulse thudding alongside a steady kick drum and joined by acidy synths and percussive effects that suggest a lighter being repeatedly flicked open. On a slightly more aggressive tip, the B-side's Cr80 adds truncated vocal yelps to its bleepy, elephantine throb. A dubby dimension emerges in the track, too, when echoing waves drift repeatedly across the huge bass that slithers across the track's underbelly. The album's most elaborate track comes last. Liv opens beatlessly with flickering shudders and what could pass for the amplified workings of an ant community but then progressively fills in the dots with an insistent beat pattern, voice fragments, and even the demented meander of accordion playing. Though Hana hardly rewrites the techno guidebook on the release, it's nevertheless a pleasurable listen, in part due to the multi-dimensional experience provided by the vinyl format and the always superb mastering work done by Rashad Becker at Berlin's Dubplates & Mastering.