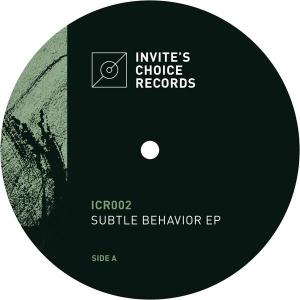 After starting up the infamous Invites Choice podcast series in 2011 and launching his Invites Choice Records with a debut EP by himself, Tim van Paradijs (A.K.A. Invite) continues with a banging follow-up-EP. The EP starts with a percussion driven, repetitive track by the likes of Spanish producer Tadeo, dubbed Deeyiam. This track lends itself perfectly for those deep yet powerful sets. Zadig is put on duty for A2 and deliverd a straight forward yet funky track named Dr. Fastolfe in which the low, bassy synth stands out and just draws you straight into the track. Invite, like in his podcast series, likes his fair mix of established artists and newcomers to the releasing scene. New to the vinyl releasing game are Dutch duo Moving Thoughts; they provide the EP with the oldschool oriented track Lost in which both the heavy-hitting kick and bass and the evolving and repeating synth stand out. Invite closes the EP with his track Micro which shows that Steve Rachmad influenced both his DJ-sets and productions for a great deal. 4 different artists, 4 different tracks but a very strong and coherent EP indeed!