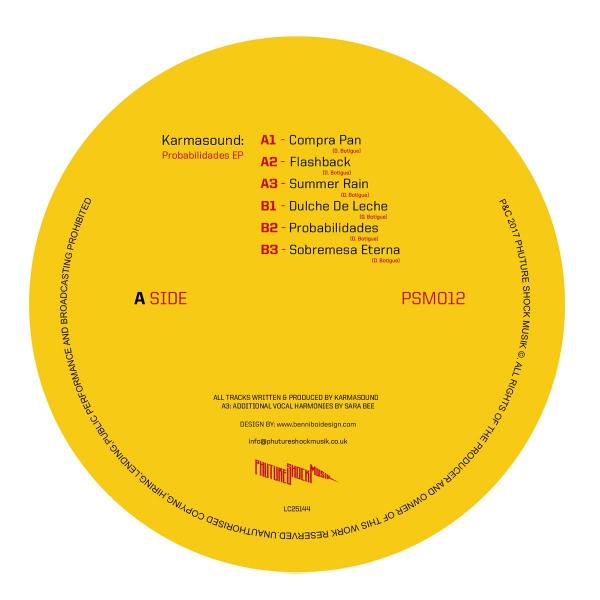 Following transmissions from Nubian Mindz and Cyclonix this year, Phuture Shock Musik returns to welcome new signing Dami n Botigu aka Karmasound to the fold, who makes his debut outing on wax with the six-track strong Probabilidades EP. Hailing from Buenos Aires, though currently residing in Barcelona, the Argentine musician and producer has plied his trade for a number of years, which has yielded collaborative projects and releases beyond his homeland; including the self-released Magnetic Love EP and later compilation appearances on Tokyo Dawn and BBE records as one half of electronic soul act Saturn s Children - with London soul singer-songwriter Emeson. While further production has surfaced on releases by Spanish hip hop outfit K.A.O.S, collaborative works under the moniker Evan& Damian, not to mention a few low-key efforts of his own. Here on Probabilidades EP, Karmasound widens his highly musical, soulful sound, and delivers an electronic-tinged release, where his South American heritage and Latin musical roots remain at the core, while traversing through broken beat, hip hop, jazz, fusion, funk and Afro-Latin flavours. With six cuts varying in rhythm, tempo and influence, the 12 highlights Botigu s extremely diverse production style and makes for a perfect introduction to a very fine talent on the rise. Kicking off side A is the stuttering bossa-bruk rhythms of Compra Pan which playfully lopes its way around jazzy keyboard stabs that duet with chirpy synth melodies and supple basslines. The frenetic beats of Flashback follows and ups the tempo, while running amok with solid double bass, spacey synths and an infectious Brazilian-infused keyboard groove that brings to mind the classic samba doido stylings of Azymuth. Before making way for the future jazz-funk of Summer Rain , where vocalist and regular collaborator, Sara Bee adds soaring vocal harmonies over syrupy Rhodes chords and a cascade of glowing synths; firmly underpinned by bristling Latin percussion and broken beats. Face down opens up with the beat-driven jaunt Dulce De Leche , which revolves around a hypnotic keyboard motif, interlocked with rolling synthbass and a tasty clave and cowbell-laden drum track that fluidly morphs between hip hop beats and lilting jazz-fusion grooves. Next up appears the up-tempo cosmic funk of Probabadilidades , where clunky, shuffling rhythms bordering on jazz jungle, collide with pattering hi-hats and claps, against a backdrop of sophisticated keys and a bulbous bassline that contorts through the arrangement. While rounding off the EP on a laidback tip is Sobremesa Eterna - a composition guided by wah guitar licks, balmy Rhodes chords and shimmering organs that cruise elegantly over off kilter rhythms; all of which inhabits a sweet spot between soulful, late-night hip hop jams and the west London sound with a Latin swagger.